Last year, I participated in a week-long summer school called SenZation 2017 (12th summer school on IoT and its Applications), which was held at Limassol, Cyprus. I was reminded of this event now as I was asked by my lab to give some details on this IoT project competition.

To start with, this summer school consisted of various tutorials provided by people from Microchip and Digital Catapult, UK. However, the best part of this event was the training sessions and to get a hands-on training for a new IoT chipset called "SODAQ Explorer". Microchip has developed this device to be used with LoRa® technology (LoRaWAN) and to connect it with the ThingsConnected platform.

After the first day of the training, we were told that there will be an IoT project challenge for delivering/presenting an idea based on local needs of Cyprus (and a running demo) using the SODAQ Explorer chipset and the ThingsConnected platform at the end of the summer school. We also tried the message functionality from Twilio.

There were 5 teams having 6 members each.

Each team had international members from different labs, wherein in my (super cool) team there was one person from each of the following labs:

Our team won the 1st prize for the IoT project challenge!!

We came up with an idea called “BabyWatcher” to monitor babies in the car when parent go out for any purchase (especially as Cyprus is too hot).

As a prize, they gave each member of our team a SODAQ Explorer IoT chipboard from Microchip. 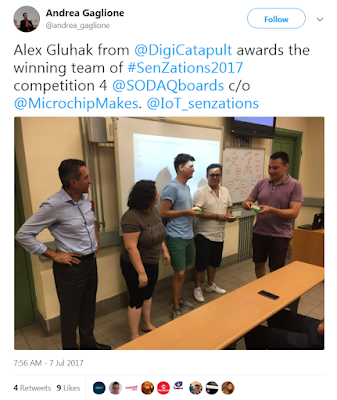